What the Engineering Team have been up to in February 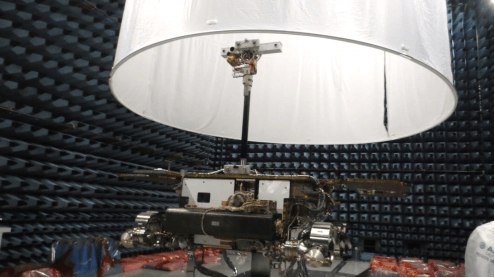 Rover in Deployed configuration in the Anechoic Electromagnetic Capability Chamber before being covered by the Yurt. The Yurt prevents “large” particles from contaminating the Rover.

“February 2020 has been very busy for the Engineering Team! We finalised the last of the shipments of equipment from our 5 months in Toulouse and received it all back in Stevenage, UK.

February has seen the Mechanical Assembly Integration and Test (AIT) Team undertaking drilling trials on the engineering and qualification model (EQM) model of the Solar Array in preparation for some Solar Array hinge repairs planned on the flight model in Turin in April.

We have had to design and build special jigs and clamps, trial different methods of preparing the work area to maintain biologically Sterile hardware, trial methods of grinding/drilling through the multiple materials that the Solar Array is made from in such a way that the critical alignment of the components is maintained.

We also had to undertake a mini Vibration Campaign during this activity to measure how much force and vibration is being applied to the EQM Solar Array, the responses measured need to go through stress analysis to ensure Solar Array structural integrity and the equipment that is mounted to it (cameras etc.) are not compromised.

In parallel to this we have been planning this repair activity to an hourly schedule, producing the controlling documentation for the planned activities and organising all the kits, tools and equipment to support them. It’s no small task!”

“Based on all the test data that we have collected, we have to calibrate all the sensors on the bogies and wheels. I am currently characterising how the sensor measurements change with temperature so that the software gets the right information.”

“I’ve been working on the Electromagnetic Capability (EMC) test report for the Rover. We have put the Rover through a series of environmental tests to demonstrate that the Rover will be compatible with itself, including the instruments, and the various radio frequency communication systems.”

“I’ve been getting stuck in to work on the Sample Fetch Rover, thinking about all the different things we will have to do both as part of the mission, and in testing beforehand, to make sure the rover works as planned (especially the locomotion sub-system, which I am going to be responsible for).

I then have to distill all of this information for the different phases and tests into requirements which are like a tick list of features and abilities that the rover will have, that we can sign off when the Rover is complete to prove that the contract has been properly carried out and the rover is fit to launch.

Every time we think of a different part of the life cycle of the rover, we come up with lots of different things that it will have to be capable of doing, so my requirements list is growing at an alarming rate!

We need to issue the first version to our sub-contractors in about a month’s time so that they can get stuck in on designing things and buying motors and things for their first demonstration models – so they need to know what they’re required to design it to do to make sure they are buying the right kinds of parts and designing in the right kinds of features!

It’s quite a fun task though I’m finding, as you have to think about how you want the final rover to operate and all the things it needs to be able to do and basically make a wish list!”

“At the beginning of the month I was working on getting all of our requirements signed off by ESA as complete, and making sure that we have provided all of the evidence from all of our tests and analysis that proves me meet the specifications they placed on the Rover.

This last week I’ve been on a company training course in Madrid, so that’s why I haven’t been able to take part in any chats! It’s part of a year-long course to improve my system engineering skills, and we have training modules in many of Airbus’ sites around Europe, for a week at a time.”