When there is so much poverty and so many problems with the world(climate change, australian wild fires etc) do you

Do you travel or spend time with your family if your off or holiday?

Did you ever go to space?

If you could choose any job in the world other than an engineer what would you choose?

Have you ever met anyone famous?

Do you believe that aliens exist?

Can you use the mobile phone in space? If so I would love to use tiktok! (1 Comment)

What do you find hardest about your job?

About the ExoMars mission

ExoMars is a programme of space missions designed by the European Space Agency and Roscosmos to try and find out if life ever existed on the planet Mars, and to test new technologies that could be used in a possible future robotic return mission to Mars. The UK Space Agency has been a major partner in the programme.

Already, the Trace Gas Orbiter satellite has been in orbit around Mars for the past three years, investigating gases in the Martian atmosphere that exist in very small amounts, such as methane. The next stage, due to launch in late 2020, is to send a robotic rover to explore the surface of Mars.

The rover has been named Rosalind Franklin after the chemist whose work lead to the discovery of the physical structure of DNA. Once safely on the Martian surface, the rover will drill down into the rock to dig up samples. These are transferred to the rover’s onboard science laboratory to look closer at their physical and chemical properties.

A mission like this takes years of hard work by many dedicated teams of people. Find out more about ExoMars on the ESA website.

Engage with the people behind ExoMars 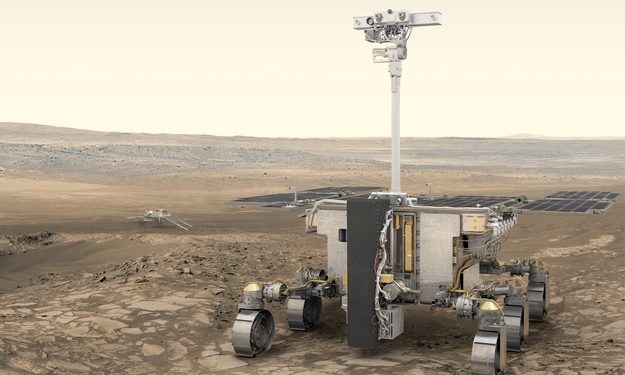 Launching in late 2020, the ExoMars rover, Rosalind Franklin, will be headline news…

In ExoMars Rover Zone, school students connect with different teams who have worked on the mission, gaining insight into the engineering, science and technology needed to send a robot to another planet.

Between January and July 2020, students will:

ExoMars Rover Zone is funded by the UK Space Agency as part of the Space Exploration Education and Outreach Award Scheme.